the bear comes at night.pdf 79 kB

This game is gorgeous in its simplicity and theme.

Do you mind if people make games based off of this? And if so, do you have specific wording you'd like for crediting?

Go nuts. A simple sentence and a link pointing back to the itch.io page would be lovely. Godspeed.

Awesome, thank you very kindly for your response! I feel like there's a lot of stuff that can be done with this. :3

The Raptors Come at Night

I need to know what the story behind this is, and I hope it's not something too traumatic to repeat.

The Bear Comes At Night is a minimalistic survival horror ttrpg about being besieged by a bear in a remote cabin.

The PDF is atmospheric and expressive, and it does a great job with its limited space. Themes of bears and night are easily reflected in the layout, and the whole thing looks and feels satisfying.

The game's mechanics are simple, with you rolling a die against the bear. Roll higher, no consequences. Roll lower, the bear hurts you. And the bear's die is higher, so it's often going to hurt you.

There's a little bit of strategy you can do by opting to cross off items to get a bonus on your die roll, but otherwise it's a grueling, arduous affair. The bear attacks over and over again until you die or luck out and get rescued by helicopter.

Overall, this might be one of my favorite one page rpgs. It does so much with so little. There's no directions to journal your experiences, but the game creates a very tense and atmospheric narrative seemingly without trying. The premise is also just grounded enough to feel viscerally compelling, even if this kind of systematic bear attack doesn't exactly happen often.

I'd absolutely recommend you check this out if you get the chance. It's a solo game, but with a few modifications it could be grafted onto another system or adapted for group play.

-When you cross out an item to add a d6 against the bear, is it added to your total, or rolled separately? Either one feels like it would make sense. 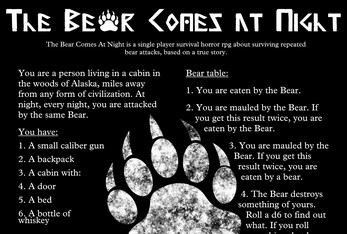